Mono Lake is filled with trillions of brine shrimp, Artemia monica, a species that lives nowhere else on earth.

These tiny, fascinating shrimp feed millions of migratory birds and contribute to Mono Lake’s ecological importance on a global scale.

Not your normal shrimp

They provide food for millions of migratory birds, making the lake an essential stop on the birds’ long journeys south to their wintering grounds or a great place to spend the summer raising chicks.

Mono Lake brine shrimp are tiny, about the length of your thumbnail, but there are so many of them in the lake, they can form thick brown ribbons and underwater plumes visible from the sky.

A small portion of Mono Lake brine shrimp are harvested by the High Sierra Brine Shrimp company and are processed to sell as food for tropical fish or commercial prawns.

The brine shrimp life cycle is tied to water temperature and season. Many brine shrimp start off as tiny cysts (dormant, undeveloped embryos) that have sunk to the bottom of the lake in the late fall, where they sit all winter in the cooler water while algae multiplies in the lake above in their absence.

In spring, as the water warms, the cysts hatch and the first generation of brine shrimp grows from almost microscopic “babies” (larvae called nauplii) to their adult form by molting their exoskeleton several times. They forage on the free-floating algae, using their 22 appendages to funnel the particles into their mouthparts.

Female brine shrimp have a visible darker brown ball of eggs above their tail, and males have large modified antennae that clasp onto the female while they mate. You’ll see this a lot when you look down into Mono’s salty waters.

One of the most fascinating parts of the brine shrimp life cycle is that in the summer when waters are warm, the female shrimp give birth to live young—they don’t harden into cysts—but as the waters cool again in the late fall, the temperature triggers cysts to form and sink to the bottom of the lake to start the process all over again!

SHRIMP IN A CUP

When you visit Mono Lake, it is easy to use a cup to scoop up brine shrimp to observe them up close. Just make sure to pour them back into the lake after a few minutes. 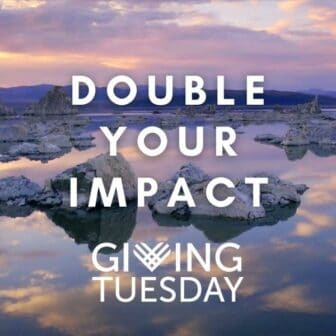 All donations are currently being matched,
up to $30,000, through November 30!