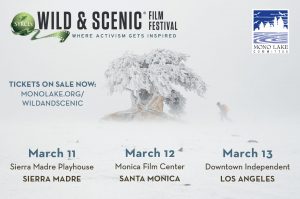 We hope you’ll be able to join us in March in either Sierra Madre, Santa Monica, or at our newest venue in downtown Los Angeles. Tickets are $20 for general admission ($25 at the door) and half-price for students. You can save 20% on tickets through February using promo code WILD20. You can also purchase a benefactor ticket, which allows you to sponsor one student’s five-day visit to the Mono Basin Outdoor Education Center (along with some other neat perks).

This year we have a number of fantastic short environmental and adventure films that are sure to leave you amazed, inspired, and smiling. The full lineup of films will be announced in February. Tickets can be purchased here for Sierra Madre, here for Santa Monica, and here for downtown Los Angeles or by calling us at (760) 647-6595. Stay tuned here on the Mono-logue for more information including the film lineup and festival sponsors.

The festival is a fundraiser for the Mono Lake Committee’s Outdoor Education Center program, which brings underserved and at-risk Los Angeles youth to the source of LA’s drinking water at Mono Lake for week-long community-building experiences in the wild outdoors. The festival is also an opportunity to connect with people who love Mono Lake and the Eastern Sierra at the southern end of the Los Angeles Aqueduct.

See you in March!

Trail Chic 2022 was a huge success

The Trail Chic fashion show fundraiser is back!